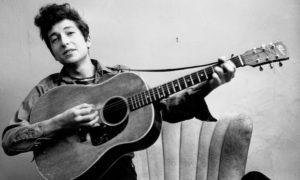 There aren’t many people about whom it could be said that modern folk music wouldn’t be the same without them. But, Bob Dylan is certainly one. His early career saw him going to Woody Guthrie’s bedside and sang the old folk songs for his hero, then recorded a collection of songs that paid tribute to the great troubadour—directly in some cases (“Song to Woody”) and indirectly in others (“Talkin’ New York”). The albums that followed came to define American folk music, or were at least a touchstone in the folk realm, for a time.

Of course, Dylan was never an artist who could be boxed into one set of expectations for long. No sooner had he become a hero of the Folk Boom than he turned and wandered on down the dusty road toward rock and roll, then eventually gospel and various other styles beyond.

Nonetheless, folkies new and old continue to marvel over the ancient-seeming balladry of his early years, songs so astute they could only be written by someone who had spent such an inordinate amount of time consuming balladry and the folk-blues. (Dylan was an obsessive explorer of both.)

As we near his 81st birthday on May 24, around a half-century after he recorded his self-titled debut, there is much to celebrate—and plenty of music to explore and consider.

In Tulsa, Oklahoma, a new museum has opened to honor the myriad contributions to American music and culture that Dylan has made during his half-century in the spotlight. Folk Alley’s sister publication, No Depression, recently sent a reporter out to cover the opening of the Bob Dylan Center.

Here at Folk Alley, we’ve filled the Classic Folk Stream with songs from Dylan’s catalog, songs from a new Dylan-centered Nitty Gritty Dirt Band release (Dirt Does Dylan) and recordings of other people singing Dylan’s songs. Dig into the Dylan playlist now, and for the rest of the month, on the Folk Alley website or the mobile app.