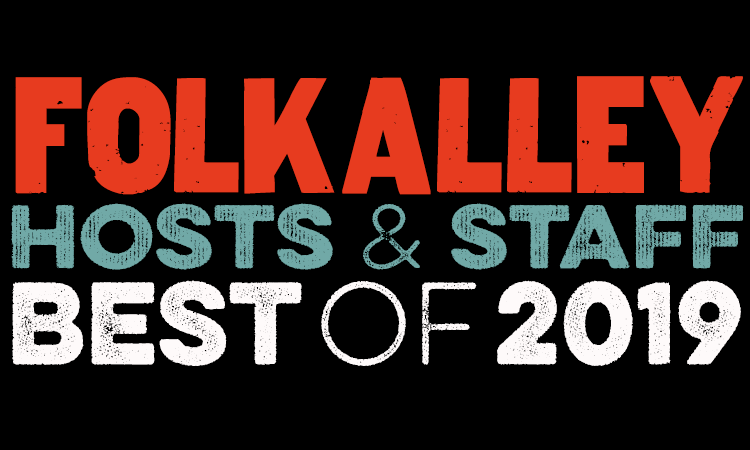 2019! I started my podcast, Basic Folk, in late 2018 so this year has been about getting well acquainted with folk music of all kinds. I was lucky enough to interview a few of these talented musicians on the pod, which means I got to spend extra time with Molly Sarlé, Che Apalache, Maya de Vitry and others. This year also rounds out a decade of music. Here are my #1 albums from the 2010’s:

The Portland songwriter channels John Prine and some kind of indescribable fairy magic to compose heartfelt stories about life’s forgotten characters. Emotions swell when Tivel describes the comings and goings of a theater janitor who loves to sing or the trans gas station worker. She finds these moments in life that are not her own, but produces songs in which she makes them all our own. Collective humanness via song unlike any songwriter I’ve encountered, save for Anais Mitchell and Prine himself.

You don’t make any sense. However, your songs make me feel things that I had previously tucked away so tight. Also, you make me laugh with your many irreverent lines like “I was toking on dope.” Here you somehow manage to turn this into something meaningful, desperate and hopeful all at once. But I still don’t know what any of it means. Please never stop making music. It is all my favorite.

Mountain Man member, Molly Sarlé is a goddamn angel. The California native nearly quit music in 2012 when she went to a Zen center to practice Buddhism and then moved to LA to pursue acting. After being given advice from Leslie Feist, Molly returned to music and started working on a record that supported her heavenly voice. Karaoke Angel was recorded in a church, which is quite clear when taking in its mystical qualities.

Yola is a British musician who has incredible life and pain in her delivery. She lays everything down with her music and then sets it all on fire when you least expect it. Powerful, moving and highly emotional, Walk Through Fire certainly lives up to its title.

First time I saw Stray Birds, it was so clear that Maya de Vitry was a genius musician with a heart of gold. On her solo debut, Maya steps into her own with songs that expand what we might think of her musicality based on the Lancaster string band that she formerly co-fronted. Be prepared to be surprised and wowed. This release is an exciting beginning to what is bound to be a tremendous career for de Vitry.

LatinGrass four piece Che Apalache, offers incredible musicianship, thoughtful songwriting with an activist heart. Led by Joe Troop, who is one of the few out gay musicians in bluegrass, the songs are sung in both English and Spanish. Troop’s perspective of living as an American abroad allows him to have a grasp on the refugee experience. The passion of his songs rings true on the group’s sophomore release.

7. Lula Wiles – What Will We Do Amazon – iTunes

It’s exciting to see the tradition of roots music being carried and modernized by Lula Wiles. On their second album, the talented trio show off their chops and songwriting abilities with an incomparable energy and heart. These women have something to say and have grown intro their collective voice on this stunning record.

His story is intense: growing up in Nairobi, Kenya on American rock radio, Ondara vowed to move to the US to pursue music after discovering Bob Dylan. He won a green card lottery and made the move to Dylan’s hometown of Minneapolis, MN. He got his break when the local public radio music station started playing songs from his YouTube channel. I know I’m not even talking about what the music sounds like, but the story is so amazing. The music completely lives up the backstory: his androgynous voice carries incredible life through his wondrous writing.

Oh lord. I don’t know what bolt of lightning Ana Egge came from, but we do not deserve her. She’s a huge talent that manages to produce the most humble, magic songs you could imagine. Working again with magician Alec Spiegelman (Cuddle Magic) as well as folk legend Iris Dement and Buck Meek (Big Thief), Egge’s knack for harmonious collaboration rings clear as a bell on this gem.

This is arguably the loudest record on my list from Hiss Golden Messenger. Led by groove master MC Taylor, the Americana act coming from Durham, NC is quickly becoming one of my favorite bands. The infectious hooks have grabbed hold of my heart and it’s topped by the love these player clearly have for each other. Phil Cook, one of the most delightful (and super talented) musicians can be counted among the players. This album is one good vibe after another. Get into it.