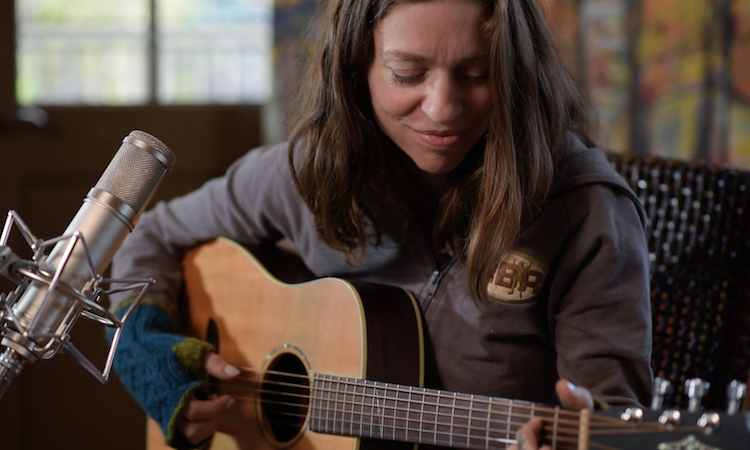 Over the course of her more than 25 years of making music, Ani DiFranco has been widely celebrated and often emulated. The trouble is, DiFranco’s work is a moving target which words and imitation fail miserably in hitting. She would argue — and has — that hers is a living, breathing body of performance art that makes its most comfortable home on stage. “I am a work in progress,” she concedes in “The Slant,” off her 1990 self-titled debut, adding some years later on the title track to ‘Evolve,’ “I don’t take good pictures ’cause I have the kind of beauty that moves.”

In an interview with Cuepoint about her last release, ‘Allergic to Water,’ Ani upped the ante even more:

“This is my problem making albums, to begin with, is that they do not move. There’s a stagnant… I may as well write my words down on paper while I’m at it, if I want them to just fucking sit there. … I’ve made incredible mistakes along the way in my recording career because I’m so living in the moment … Look at all these beautiful songs that have dubious to highly unfortunate recordings. … But that’s the kind of artist I am, though. The consummate moment, it happens on stage. It comes and it goes. That’s where my art lives. That’s where it’s truest. All of my songs will be most resonant on a stage in a moment, not on a recording, because it’s translating something there. The art, itself, when it comes to me, is happening in time. And, I think that’s what I’m most comfortable with. … the song is transforming all the time. To me, that’s truth.”

Even so, DiFranco has made some truly remarkable records. From that eponymous, saber-rattling debut to the pointedly poetic ‘Not a Pretty Girl’ to the top-to-bottom solo set that is ‘Educated Guess’ to the sputtering prose of ‘Allergic to Water,’ Ani has never stopped searching for the answers and anthems that might help us all get through life with just a bit more honor in our hearts and fire in our fists. She’s a folk singer through and through, cut from the same cloth as Pete Seeger and Woody Guthrie, but with a style completely of her own.

Because of her absolute inability to color — or stand — within any culturally dictated lines, DiFranco amassed a rigorously anti-establishment fan base early on that, for perhaps the first time, saw something of themselves in someone else. And they claimed her as their own, clinging to her words in times of madness and mirth.

Still, as she tells Folk Alley, they have never been shy about letting her know when she’s not meeting their expectations. It’s just that, these days, the floggings are much more public because of “this new kind of coliseum of social media where people get dragged out and skewered and people cheer”:

“My whole life one of my strengths, I think, is not being afraid — not being afraid to just say it. And I’ve caught a lot of flak. But I’ve also got the respect of people that I respect, people that I care about, and people that I’ve stood up for. So that always just felt doable. But now, when you don’t know where the attack will come from, when it could be the person you’ve been standing next to this whole time that will suddenly turn on you … it’s very disturbing.”

DiFranco did, indeed, get skewered a few years back over plans to host a songwriting retreat at a former plantation outside of her adopted hometown of New Orleans. Though she originally believed her song “Allergic to Water” to be about the birth of her son, she came to find out that is was a sort of subconscious foreshadowing of the deep hurt she would suffer over the controversy. In it, she sings about the need to look for empathy outside of ourselves… sometimes very far outside: “You may wonder what would possess someone like me to go on. You may wonder how it’s possible something so basic could go wrong. And all I can say is, if you stretch your mind all the way as far as it goes, there’s someone out there who lives further than that in a place you can never know.”

In her 30A Folk Alley Session, Ani offers a sobering rendition of that track, along with sprightly takes on “Play God” and “Binary,” two socially minded pieces that further exemplify her singular sound which, try as we all might to write about it or replicate it, no one comes close to pinning down.